I’m very happy to share an exciting personal announcement with you: I just launched a crowdfunding campaign, which is raising funds to record my debut album with Producer Mike Davidson right here in Boston! If we reach our funding goal, I’ll be able to get into the studio with Mike to record the album and work with some really talented musicians. This campaign is a huge door opener for me and I can’t wait to share this music with you.

Mike and I have already recorded one song together so you can get a feel for the project! It’s called “Homeward”, and it’s available right now for free streaming on the campaign page. This song is a great example of the kind of album we’ll be able to make if this campaign is successful. 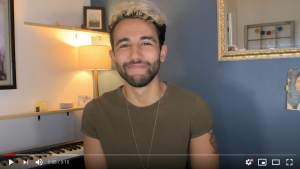 Watch my video to learn more about my project and how you can help, and preview all of the exclusive artwork, music, experiences and other gifts that I’ve put together as a big thank you for your support!

With love and gratitude,

Esteban Suero (EROS) is a New York City actor and singer-songwriter. He currently lives in Astoria with his partner and German Shepherd. In the midst of the pandemic, Eros has rediscovered his love for songwriting and has found solace and new found creativity. Some major influences of music include U2, ColdPlay, Sara Bareilles, A Fine Frenzy and Girl Blue. Most recent theatrical credits include Rockin’ Road To Dublin National Tour as the Lead Vocalist (directed by Jeff Whiting), Will Bloom in Big Fish, and The Barber in Man of La Mancha at Westport Country Playhouse (directed by Mark Lamos). Eros intends to rewrite the narrative of POC/POC-LGBTQ+ artists in the music industry, and create a voice for so many who have often felt like they couldn’t have one. Grateful for music, grateful for storytelling, and grateful for the chance to make an impact everyday.