Read POST
By Shay Thomas
Written on
August 29, 2020
in
Music

Via Simon and Schuster. 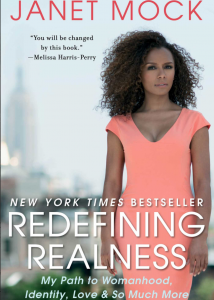 In her profound and courageous New York Times bestseller, Janet Mock establishes herself as a resounding and inspirational voice for the transgender community—and anyone fighting to define themselves on their own terms.

With unflinching honesty and moving prose, Janet Mock relays her experiences of growing up young, multiracial, poor, and trans in America, offering readers accessible language while imparting vital insight about the unique challenges and vulnerabilities of a marginalized and misunderstood population. Though undoubtedly an account of one woman’s quest for self at all costs, Redefining Realness is a powerful vision of possibility and self-realization, pushing us all toward greater acceptance of one another—and of ourselves—showing as never before how to be unapologetic and real.

This book is my truth and personal history. I have recalled facts, from events to people, to the best of my ability. When memory failed me, I did not seek answers in imagination. I sought clarity through conversations with those who’ve shared experiences with me. When my recollection of events varied from theirs, I sided with my memory and used their voice, often direct quotes, to contextualize events.
Many people featured in the book gave me permission to use their names; others I changed or labeled with an initial to protect their privacy, whether they were guilty, innocent, indifferent, or somewhere in between.
As for terminology, I prefer to use trans over transgender or transsexual when identifying myself, although I don’t find either offensive.I do not use real or genetic or biological or natural to describe the sex,body, or gender of those who are not trans. Instead, I’ve used cis, aterm applied to those who are not trans and therefore less likely toexperience the misalignment of their gender identity and assigned sex at birth—a matter we do not control, yet one that continues to frame who is normalized or stigmatized.
Finally, though I highlight some of the shared experiences of trans women and women of color throughout this book, it was not written with the intent of representation. There is no universal women’s experience. We all have stories, and this is one personal narrative out of untold thousands, and I am aware of the privilege I hold in telling my story. Visit JanetMock.com for more information, resources, and writings.

Janet Mock is a writer, TV host, and advocate tackling stigma through storytelling. With a Master’s in journalism from New York University, the Honolulu native began her career as an editor at People.com and went on to write cover stories for Marie Claire, Interview, and The Advocate as well as essays for The New Yorker, The New York Times, and Lenny. She produced HBO’s The Trans List, hosts the podcast Never Before, and serves as a columnist for Allure. Called a “fearless new voice” and “trailblazing leader” who “changed my way of thinking” by Oprah Winfrey, Janet was a featured speaker at the historic Women’s March on Washington. She is the author of Surpassing Certainty and the New York Times bestseller Redefining Realness. Find out more at JanetMock.com.

Via Simon and Schuster.