We are The Narwhal.

Our team of investigative journalists dives deep to tell stories about Canada’s natural world you can’t find anywhere else.

We’re tired of false dichotomies and business-as-usual perspectives. We’re not shy about the fact we think Canada’s greatest assets are our people, our lakes, our rivers, our forests. We tell stories Canada’s big news outlets miss and hustle to help our readers make sense of complex (sometimes downright messy) issues.

As a non-profit magazine, our goal isn’t to sell advertising or to please corporate bigwigs — it’s to bring evidence-based news and analysis to the surface for all Canadians. The Narwhal is a pioneer of non-profit journalism in Canada and is supported by more than 1,700 monthly members. In April 2019, The Narwhal became the sole Canadian member of the Institute for Nonprofit News, recognizing our adherence to strict standards of editorial independence and financial transparency.

The Narwhal has been the recipient of several awards since its launch. In 2018, The Narwhal won four Canadian Online Publishing Awards, including silvers for best news website and best publication and gold and silver for best photo journalism. In May 2019, The Narwhal won an award for excellence in photojournalism from the Canadian Association of Journalists. In November 2019, The Narwhal won two awards from the Northwest Territories Professional Media Association — one for best published word and one for best documentary short. In May 2020, The Narwhal won two awards from the Digital Publishing Awards — silver for photo storytelling and silver for feature writing. Also in 2020, photographer Amber Bracken was awarded the Charles Bury President’s Award by the Canadian Association of Journalists for her outstanding contributions to journalism in Canada for her coverage of the Wet’suwet’en crisis for The Narwhal. 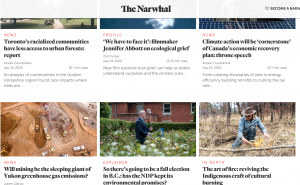