The Opposite of Hate: A Field Guide to Repairing Our Humanity

Read POST
By Shay Thomas
Written on
August 25, 2020
in
Books

The Opposite of Hate: A Field Guide to Repairing Our Humanity 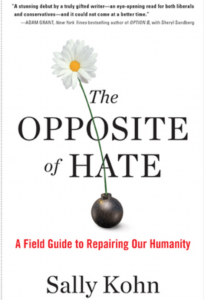 Divisive political speech, online trolling, and hate crimes are escalating, and in our current political climate so many of us are seething at “the other side.” As a progressive commentator on Fox News and now CNN, Sally Kohn has made a career out of bridging intractable political differences and remaining good-natured in the face of intense provocation. But these days even Kohn has found herself wanting to breathe fire at her enemies.

It was time, she decided, to look into the subject. In The Opposite of Hate, Kohn talks to leading scientists and researchers, investigating the evolutionary and cultural roots of hate and how simple incivility might lead to more dangerous acts. She travels to Rwanda, the Middle East, and across the United States, introducing us to former terrorists, former white supremacists, and even some of her own reformed Twitter trolls, drawing surprising lessons from some of the most dramatic examples of leaving hate behind. As Kohn boldly confronts her own shameful moments, whether it’s the girl she bullied in school or her own contribution to her daughter’s negative attitudes, she points the way toward change.

Her hopeful message: While we all have the potential to hate, we also all have the capacity to combat it. It turns out that the opposite of hate is not love. It’s the understanding of how hate operates, how it’s fostered, and how easily we fall into its grip. The Opposite of Hate offers the tools to move forward together.