The Tyee values our readers.

You are a communicative bunch, for which we’re grateful. You tell us what you think — and what you want from us — through story comments, surveys, phone calls, the articles you choose to read and share. Many of our articles arise from your suggestions or are improved by your input….

You are invited to deepen the relationship by subscribing to one or more of our email newsletters, and by supporting us financially by becoming a Tyee Builder. In return, we pledge to keep listening in order to produce journalism reflecting the values we share — a deep concern for truth-telling, justice, the environment and holding power accountable. We exist to serve you (not advertisers, hedge fund owners or political agendas).

Support from Tyee readers keeps our articles free and open for everyone to read, and lets us fairly pay our writers. It also allows us to stay completely focused on publishing truly valuable journalism for our readers, instead of being driven to sell advertising.

The Tyee values our independence.

The Tyee does not make a profit. Every dollar we receive we invest in journalism.

About half of our budget is supported by funding from Eric Peterson and Christina Munck, who live in British Columbia and who also fund, through their charity the Tula Foundation, the Hakai Institute and Hakai Magazine in B.C. Their demands of The Tyee are simply journalistic excellence and independence. They exert zero influence on editorial decision-making.

The next largest stream of Tyee revenue comes from our Builders — you who contribute dollars even though we have no paywall. (Thanks for keeping The Tyee available to all!)

Our smallest fractions of revenue come from advertisers and project partners who we choose mindfully.

Any advertising appearing on The Tyee does not imply an endorsement of the products, events, or campaigns being advertised, and advertisers have no input on our editorial decisions.

The Tyee is currently structured as a for-profit business. However, we now are working towards twin goals: become a non-profit organization that is majority reader funded. We welcome your help in getting there soon!

Since our founding in 2003, The Tyee has published public interest journalism that was produced by other parties who received support from charitable organizations in two ways.

Fellowships: The Tyee promoted to its readers the Tyee Investigative and Solutions Fellowships. The money was contributed by donors directly to Tides Canada and an advisory board of experts, arms-length from The Tyee, recommended bursaries to individual journalists who applied for these fellowships. The journalism produced by these fellowship recipients was published by the Tyee.

The Tyee values our region.

The Tyee is British Columbia-centred, with a strong focus on issues that cross provincial or even national boundaries.

In Canada’s mediascape few owners are based in B.C., which is why The Tyee was founded. We are committed to investigating, explaining and celebrating our home, and bringing a B.C. perspective — and impact — to Canadian affairs.

We do so mindful of our connection to the Pacific bioregion that extends from Alaska to Northern California. Cascadia, as some call it today, was, before the arrival of Europeans, the setting for a thriving trade network among diverse Indigenous Peoples, who communicated using a language they simplified for sharing, called “Chinook.” It became a means for Indigenous Peoples and Europeans to communicate as well.

Tyee is a Chinook word drawn from the Nuu-chah-nulth language, which means leader. It has come to mean, as well, a Chinook or spring salmon over 30 pounds. That’s our mascot. The Tyee, feisty and swimming free.

The Tyee values the impact we make.

Our greatest measure of impact is the fact that so many read us daily. Last time we checked, the number of page views received by The Tyee since its start tops 100 million.

These are The Tyee’s principles.

Seek a sustainable planet: Report with the next generation in mind. Expose dangers to the environment. Bring to light the true value of nature. Find and share practical solutions.

Operate ethically: Pay staff and contributors fairly. Be transparent about how we pay our bills. Spend every dime to create more and better journalism. Strive to be majority reader funded. Grow responsibly.

A bit more background on The Tyee.

If you’d like to read about our many journalistic breakthroughs and highlights since our founding in 2003, here’s a round-up.

The financial history of The Tyee began with an initial investment by Working Enterprises, a Vancouver-based labour-affiliated investment group that has as part of its mission funding socially responsible organizations. Working Enterprises, Eric Peterson and Christina Munck were joint investors until 2018, when Peterson and Munck became the sole investors in The Tyee.

The Tyee is funded increasingly by readers, who we call Tyee Builders. Builders pledge a monthly or one-time financial contribution to help us strengthen and grow. Contributions from Tyee Builders are the fastest-growing part of our budget, now making up about one-third of our revenue. We are aiming to make two-thirds of our budget reader driven.

Think of joining as a Builder a voluntary subscription — with extra benefits for you as well as for The Tyee and our national conversation.

Didn’t find the answers you were looking for? Please feel free to contact us by clicking here.

We need to do even more impactful journalism. With your help, we will.The Tyee is a reader-supported publication. We’ve been able to ramp up publishing during the COVID-19 pandemic because we have the financial support of over 3,500 readers who contribute on a monthly basis.

We want to grow our team and do even more, but we need your help to do it. We need to add 600 new monthly supporters to our Tyee Builders program so that we can hire more staff, launch our podcast, and do more investigations.

Reader support means that we can pay our talented journalists to do their work and keep our articles free and open for everyone.

If you value our reporting, please join Tyee Builders and help us hit our target of 600 new monthly supporters by midnight on Sept. 28. Click here to sign up now. 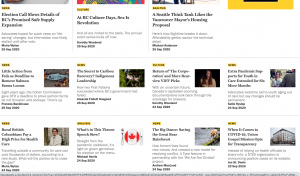