When Affirmative Action Was White: An Untold History of Racial Inequality in Twentieth-Century America

When Affirmative Action Was White: An Untold History of Racial Inequality in Twentieth-Century America 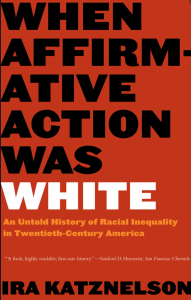 A groundbreaking work that exposes the twisted origins of affirmative action.

When Affirmative Action Was White demonstrates that all the key programs passed during the New Deal and Fair Deal era of the 1930s and 1940s were created in a deeply discriminatory manner. This was no accident. With the United States still in an era of legal segregation, the powerful southern wing of the Democratic Party provided the framework for Social Security, the GI Bill, and landmark labor laws that helped create the foundations of the modern middle class. Through mechanisms that specifically excluded maids and farmworkers and through laws that kept administration in local hands, the gap between blacks and whites actually widened despite postwar prosperity. The publication of this deeply disturbing work promises to create a national debate on the meaning of affirmative action and the responsibility of government.