Their Eyes Were Watching God

Their Eyes Were Watching God 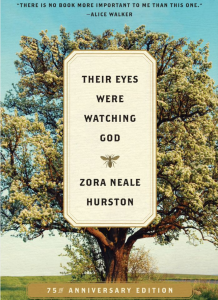 The epic tale of Janie Crawford, whose quest for identity takes her on a journey during which she learns what love is, experiences life’s joys and sorrows, and come home to herself in peace. Her passionate story prompted Alice Walker to say, “There is no book more important to me than this one.”

When first published in 1937, this novel about a proud, independent black woman was generally dismissed by male reviewers. Out of print for almost thirty years, but since its reissue in paperback edition by the University of Illionois Press in 1978, Their Eyes Were Watching God has become the most widely read and highly acclaimed novel in the canon of African-American literature.

With haunting sympathy and piercing immediacy, Their Eyes Were Watching God tells the story of Janie Crawford’s evolving selfhood through three marriages. Light-skinned, long-haired, dreamy as a child, Janie grows up expecting better treatment than she gets until she meets Tea Cake, a younger man who engages her heart and spirit in equal measure and gives her the chance to enjoy life without being a man’s mule or adornment. Though Jaine’s story does not end happily, it does draw to a satisfying conclusion. Janie is one black woman who doesn’t have to live lost in sorrow, bitterness, fear, or foolish romantic dreams, instead Janie proclaims that she has done “two things everbody’s got tuh do fuh theyselves. They got tuh go tuh God, and they got tuh find out about livin’ fuh theyselves.”

Praise for Their Eyes Were Watching God

‟There is no book more important to me than this one.”