This Bridge Called My Back: Writings by Radical Women of Color by Cherríe Moraga

This Bridge Called My Back: Writings by Radical Women of Color by Cherríe Moraga 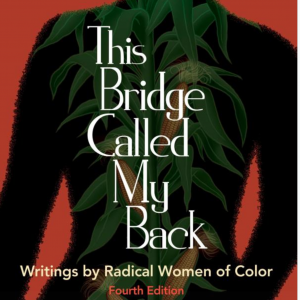 “These essays and poems do more than just revisit the hopes, fears, frustrations, and accomplishments of women of color circa 1981; they also shed light on concerns women continue to face today … There are lines of poetry here sure to stir the imagination and connect with all ages, races, and genders … This Bridge Called My Back deserves to be picked up by a new generation of radical women.” ― ForeWord Reviews

“Immense is my admiration for the ongoing dialogue and discourse on feminism, Indigenous feminism, the defining discussions in women of color movements and the broader movement. I have loved this book for thirty years, and am so pleased we have returned with our stories, words, and attributes to the growing and resilient movement.” ― Winona LaDuke (Anishinaabe), Executive Director, Honor the Earth

Praise for the Third Edition

“This Bridge Called My Back … dispels all doubt about the power of a single text to radically transform the terrain of our theory and practice. Twenty years after its publication, we can now see how it helped to untether the production of knowledge from its disciplinary anchors―and not only in the field of women’s studies. This Bridge has allowed us to define the promise of research on race, gender, class and sexuality as profoundly linked to collaboration and coalition-building. And perhaps most important, it has offered us strategies for transformative political practice that are as valid today as they were two decades ago.” ― Angela Davis, University of California, Santa Cruz

“This Bridge Called My Back … has served as a significant rallying call for women of color for a generation, and this new edition keeps that call alive at a time when divisions prove ever more stubborn and dangerous. A much-cited text, its influence has been visible and broad both in academia and among activists. We owe much of the sound of our present voices to the brave scholars and feminists whose ideas and ideals crowd its pages.” ― Shirley Geok-lin Lim, University of California, Santa Barbara

“This book is a manifesto―the 1981 declaration of a new politics ‘US Third World Feminism.’ No great de-colonial writer, from Fanon, Shaarawi, Blackhawk, or Sartre, to Mountain Wolf Woman, de Beauvoir, Saussure, or Newton could have alone proclaimed this ‘politic born of necessity.’ This politic denies no truths: its luminosities drive into and through our bodies. Writers and readers alike become shape-shifters, are invited to enter the shaman/witness state, to invoke power differently. ‘US Third World Feminism’ requires a re-peopling: the creation of planetary citizen-warriors. This book is a guide that directs citizenry shadowed in hate, terror, suffering, disconnection, and pain toward the light of social justice, gender and erotic liberation, peace, and revolutionary love. This Bridge … transits our dreams, and brings them to the real.” ― Chela Sandoval, University of California, Santa Barbara

A poet, playwright, and cultural activist, Cherríe Moraga is Artist in Residence in the Department of Theater and Performance Studies and in the Comparative Studies in Race and Ethnicity Program at Stanford University. She is the author of many books, including A Xicana Codex of Changing Consciousness: Writings, 2000–2010 and Loving in the War Years: Lo que nunca pasó por sus labios.

Gloria Anzaldúa (1942–2004) was a poet, metaphysical philosopher, and scholar of Chicana cultural theory, feminist theory, and queer theory. Her books include Borderlands/La Frontera: The New Mestiza and The Gloria Anzaldúa Reader, a posthumously published collection of her work.